Blog - Latest News
You are here: Home / Yoga Blog / Yoga Blogs / Is ‘Alien Yoga’ the new fad? Here’s all you need to know about the not s...

It was International Yoga Day a few days ago and we witnessed the spirit of celebration across the globe. Though Yoga is an ancient concept originated and practised in India, since last few years 300 hour YTTC has gained its ardent followers Worldwide who can vouch for the goodness of it. However, there is something which has caught the fancy of people lately and has been termed as ‘Alien Yoga! The term sounds intriguing so let’s decode it further. The head Guru Mahi at Mahi Yoga Centre will tell you more about it.

Alien Yoga has got nothing to do with Aliens, it’s just a type of Yoga practice which is quite unique and looks amusing which is why it has been named so. As a matter of fact, Alien Yoga is not a new discovery. It has been practised in India by Yogis since decades. The actual term for the so called Alien Yoga is ‘Nauli Kriya’. Nauli kriya is the strange wave like movement of the stomach which looks almost impossible to be performed at first glance.

The term Nauli Kriya has been derived from Sanskrit wherein Kri means to perform an action or put effort and nauli means boat. Together they make nauli kriya which is an abdominal technique which massages the internal organs along with muscles by moving the abdomen in a wave motion. The best metaphor to explain Nauli Kriya is a boat moving in a stormy sea! 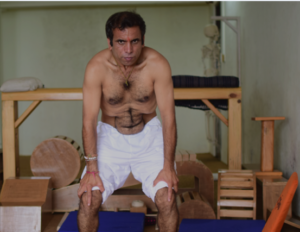 Just like any other form of Yoga, Nauli kriya too has its own set of benefits.

However, it is to be noted that Nauli Kriya is not a part of general yoga classes and one has to take resort to advanced learning. Also it has been recommended to practice the Alien Yoga under the guidance of an expert trainer to avoid any damage or injury to your organs. Yoga Teacher Training in Dharamsala, Goa, and Rishikhesh under Yoga Guru Mahi can help you in getting acquainted with the complex Nauli Yoga. The course can further help you in training others as well.

For achieving Nauli Kriya to perfection one needs to follow certain muscular actions which are as follows:

The Nauli yoga should always be practised on an empty stomach or after 6-7 hours of having a meal. Also it individuals with hypertension, hernias, heart diseases, ulcers or people with gastrointestinal ailments should avoid practising the Nauli Yoga. Even expectant mothers should avoid this exercise.

Nauli Kriya can be one of the greatest ways for kick starting the day with a boost of energy.

Pranayama
Celebrities showcasing their love for Yoga – Here’s your motiva...

Thinking about transforming your life with yoga? Here’s all you need to k...
Scroll to top