The cardiovascular system has three components:

The heart is a muscular organ which pumps blood through the blood vessels of the circulatory system. The blood provides the body with oxygen and nutrients, as well as removing metabolic wastes. The heart is located in the middle compartment of the chest.

The heart is situated in the middle of the mediastinum behind the breast bone in the chest, at the level of Thoracic vertebrae T5-T8. The largest part of the heart is usually slightly offset to the left (though occasionally it may be offset to the right).

The pericardium encloses the heart and also attaches to the mediastinal fascia, providing anchorage for the heart. The dorsal surface of the heart lies near to the vertebrae, and the anterior surface sits deep to the sternum and costal cartilages. The great veins the superior and inferior venae cavae and the great arteries, the aorta and pulmonary trunck are attached to the superior surface of the heart, called the base, which is located at the level of the third costal cartilage.The inferior tip of the heart, the apex, lies just to the left of the sternum.

Chambers and the cardiac cycle:

The atria are connected to the ventricles by the atrioventricular valves and they are separated by the coronary sulcus The right atrium receives deoxygenated blood from the body and the left atrium receives oxygenated blood from the lungs. When these contract the blood is pushed into the ventricles, which pump to propel the blood to the lungs and the rest of the body. The left heart pumps to the systemic circulation and the right heart pumps to the pulmonary circulation.

Blood is abodily fluid with collection of specialised cells that delivers necessary substances such as nutrients and oxygen to the cells and transports metabolic waste products away from those same cells. It helps to maitain water content, body temperature regulation and plays a part in fighting infection and healing injuries.

Blood forms about one-twelfth of the body weight of an adult, amounting to about 5 litres (11pints) in volume.

It is composed of blood cells suspended in blood plasma.

Blood Plasma is the straw colored liquid portion of the blood. 92% is composed of water and the rest 8% is made up of plasma proteins. It is mostly composed of dissolved proteins, mineral ions, glucose, clotting factors and carbon dioxide.

The remaining 45% of blood is made of three types of specialized cells.

Red blood cells are membrane lined sacs of hemoglobin. They carry oxygen. They are able to bind oxygen in lungs and release oxygen in the tissues. Contain hemoglobin, an iron-containing protein, which facilitates transportation of oxygen by reversibly binding to this respiratory gas .

The RBC are produced in the bone marrow and circulate in the body for approximately 120 days after which they are trapped and broken down by spleen.

WBCs or white blood corpuscles are known as leukocytes. They make for 1% by volume of total blood. Leukocytes are cells of the immune system that provide protection to the body from foreign particles and infectious diseases.

Platelets are also known as thrombocytes. The lifespan of platelets is 5-9 days. The most important function of platelets is blood coagulation or blood clotting. They stick to the damaged blood vessels surface prevent bleeding. Their average life span is four days after that spleen removes them from the body.

There are three kind of blood vessels in the body:

Carry the blood away from the heart towards organs and tissues. Apart from the arteries their smaller branches, arterioles, distribute blood from the heart cappilaries in all parts of the body. Their thick walls and muscular and elastic layers can withstand the high pressure that occurs when the heart contracts. An artery narrows when the heart relaxes, helping to push blood onwards. The largest artery is aorta.

They carry blood towards the heart. They are more flexible than an artery and its walls are considerably thinner. The blood inside a vein is under relatvely low pressure. Many larger veins contain valves that maintain the unidirectional blood flow.the two main veins returning the blood from the upper and the lower halves of the body is the superior venae cavae and inferior venae cavae. They serve as blood reservoirs expanding to hold varying amounts of blood.

The smallest and thre most numerous of blood vessels, capillaries convey blood between aretries and veins. They are those minute vessels found throughout the tissues. Exchange of oxygen, nutrients, carbon di oxide and other wastes between the blood and the tissues takes place in the capillaries where they form a capillary bed as they enter the tissues. Only 5%of the body’s blood is travelling in the capillaries with 20% in arteries and 75% in the veins.

There are two principle circuits of circulation :

From the right atrium deoxygenated blood is passed to the right ventricles, the pulmonary artery and the lung’s arterioles and capillaries. Herethe exchange of gases between blood and air takes place. Oxygen diffuses into the blood and carbon di oxide leaves the blood. The oxygenated blood then flows via the pulmonary veins into the left atrium of the heart. From the left atrium it enters the left ventricle to be pumped again through the systemic circulation.

Thus, the term double circulation is given. 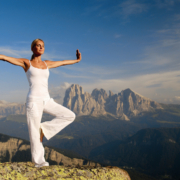