Most of you haven’t even heard or read this word let alone knows the meaning of it, but this word is of grave importance to yogis as they know the importance of Kundalini. 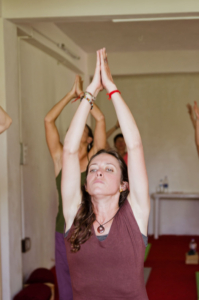 Kundalini is the indistinct energy that exists in us and we are not talking about physical energy here, this energy is not an ordinary energy because when it awakens it can change a person and his/her life completely. Not in a bad way but in a good way as this energy shows why we are born, what’s the purpose of life and answer all the questions that are beyond science and logic.

Now after telling its meaning and importance all of you must be curious about Kundalini but wait there’s a catch, the energy we are talking about is not awake in a normal human and is in sleeping mode that’s why Kundalini is symbolized as snake, coiled up snake to be more precise. A still snake can’t be detect easily same goes for sleeping Kundalini but when it awakes, it can open the Ajna, third eye Chakra (sixth sense) which give the power to see beyond physical world and see the world that we thought didn’t exist and can’t be seen by other humans.

Now the question is how to awake this energy or Kundalini? There are two answers to it, 1st is that a guru/teacher can awake kundalini of a person temporarily by transmitting energy, it is called Shaktipat and the 2nd answer is that it can be awaken by continuous meditation, pranayama and asanas that compromise Kundalini yoga but the second option take years to achieve the ‘awaken Kundalini’, on the other hand temporary kundalini awakening is done to give an enthusiast a small experience for creating a base.

Above information about Kundalini is just a small part because the main aim of Kunndalini is to balance all the seven chakras and reaching the ultimate goal of a human being (in Hinduism) is to connect to the Supreme Power (God) and start a new spiritual life and staying ignorant of lust, greed, lying and all the sins thus becoming pure human being and working towards the purpose of his/her life created by God.

So kundalini doesn’t only balance sixth chakra (sixth sense) but also balance the last and most important chakra of all called Sahasrara (Crown Chakra) which is the main reason of doing yoga by ancient yogis.

Today most of the people do yoga to have better physical and mental health but they ignore the most important aspect of yoga and that is spiritual aspect which includes chakras, Nadis, Kundalini, Atma and Sahasrara. Shasrara is the last goal of doing yoga.

Many yoga practitioners don’t even know the meaning of these words written above because they have learned yoga from eBooks or videos online, there is nothing wrong in learn from these sources but nothing can’t be compared to a personal yoga teacher who can tell your mistakes or personally guide you that’s why it’s more preferable to learn from real teacher. And our Yoga Teacher Training in Rishikesh, Goa and Dharamsala at Mahi Yoga is a good way to really explore yoga while learning each and every aspect of it

Most Dangerous & Most Profitable

Now coming back to Kundalini, it has many dangers that can permanently harm mental and physical health of a person if done without preparation or practice because it is the divine energy that can’t be measure not controlled in a day or week and sometimes in whole life, think of it in this way- if a person wants to reach first floor through stairs then he or she has to take one stair at a time not that he will become superman and can go straight to the 1st floor without taking stairs, right? Or supernaturally jumping and reaching the topmost stair.

So, in order to awake kundilini properly and permanently a person has to do kundalini yoga continuously because it has asana, pranayama and meditation that are specifically made for awakening kundalini, otherwise if it’s done improperly then a person will have to go through many bad things like it can cause feeling of electricity to run through body or being in coma or paralysis and so on.

It is our responsibility to learn everything about kundalini and then do kundalini yoga because it is the most dangerous form of yoga but today many people are showing interest towards it. So it’s our responsibility to have the correct approach on this subject by learning each and everything from the correct sources and performing this yoga in the presence and guidance of a knowledgeably yoga teacher from Mahi Yoga.

After reading its dangers many of you must be afraid but don’t be, because as we have said before ‘a person has to do this form of yoga in the presence and guidance of a knowledgably yoga teacher’. And many people have awakened Kundalini permanently and successfully without any kind of harm.

If it’s done correctly and without any personal hidden agenda then this form of yoga can show the true meaning of life and the Ultimate Truth after each and everything in this world. Kundalini yoga has many-many great profits and that’s why it is most dangerous too.

At last, a person don’t has to be afraid of Kundalini and Kundalini Yoga as long as he or she has proper guidance by Guru (Yoga Practitioner) but at the same time a person shouldn’t take this subject lightly at all, it is everybody’s responsibility who knows about this topic properly to shed more light and properly educate those who don’t have proper knowledge about Kundalini & Kundalini Yoga.

How to evaluate a typical Yoga Teacher Training in India

Has Insomnia got the better of you? Here’s how Yoga can help you in getting your beauty sleep.